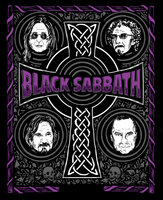 The Complete History of Black Sabbath

The definitive history of the band that invented heavy metal—featuring rare photographs, a complete discography and an introduction by Robb Flynn.

With its infernal sound and dark lyrics, Black Sabbath has been a force of nature for half a century. Its career spans eleven different line-ups and nineteen studio albums in addition to the twenty-eight solo albums of the original four members.

Joel McIver explores the complete history of Sabbath, from precursor bands to history-making albums and on to the present. With more than 150 photos, a gatefold family tree tracing the development of the band, a complete discography, and a foreword by Machine Head frontman Robb Flynn, this is the must-have book for any Sabbath fan.