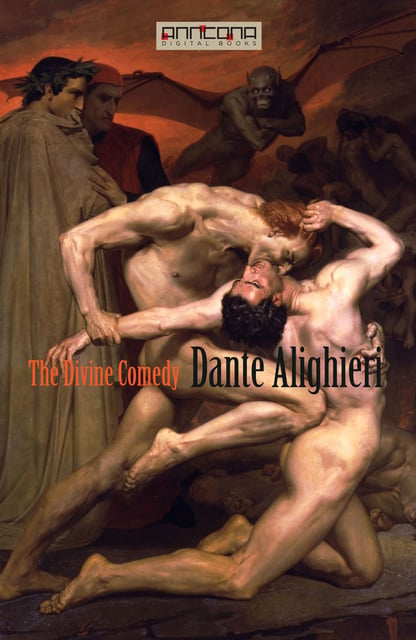 The Divine Comedy - FOOTNOTES edition
The Divine Comedy (Italian: Divina Commedia) is an epic poem written by Dante Alighieri. It is widely considered the preeminent work of Italian literature, and is seen as one of the greatest works of world literature. The poem's imaginative and allegorical vision of the afterlife is representative of the medieval world-view as it had developed in the Western Church by the 14th century. It is divided into three parts: Inferno (Hell), Purgatorio (Purgatory), and Paradiso (Paradise/Heaven).
The poem is written in the first person, and tells of Dante's journey through the three realms of the dead, lasting from the night before Good Friday to the Wednesday after Easter in the spring of 1300. The Roman poet Virgil guides him through Hell and Purgatory; Beatrice, Dante's ideal woman, guides him through Heaven. On the surface, the poem describes Dante's travels through Hell, Purgatory, and Heaven; but at a deeper level, it represents allegorically the soul's journey towards God.
We have published two different editions; with Footnotes or with Endnotes. In the Footnotes edition the explanatory footnotes are in conjunction with each passage in the text. In the Endnotes edition, for a more uninterrupted readability, there are numbered interactive reference links and all notes are collected at the end of book. Your e-reader will easily move back and forward between text and endnote.
This edition was translated by Charles Eliot Norton (1827-1908), who was a leading American author, social critic, and professor of art. He was a progressive social reformer and a liberal activist whom many of his contemporaries considered the most cultivated man in the United States. This translation is in prose (a form of grammatical structure and natural flow of speech rather than the original blank verse) and includes more than 1.380 footnotes and explanations.
Durante degli Alighieri, simply called Dante (c. 1265-1321), was a major Italian poet of the Middle Ages. His Divine Comedy, originally called Comedìa and later called Divina by Boccaccio, is widely considered the greatest literary work composed in the Italian language and a masterpiece of world literature