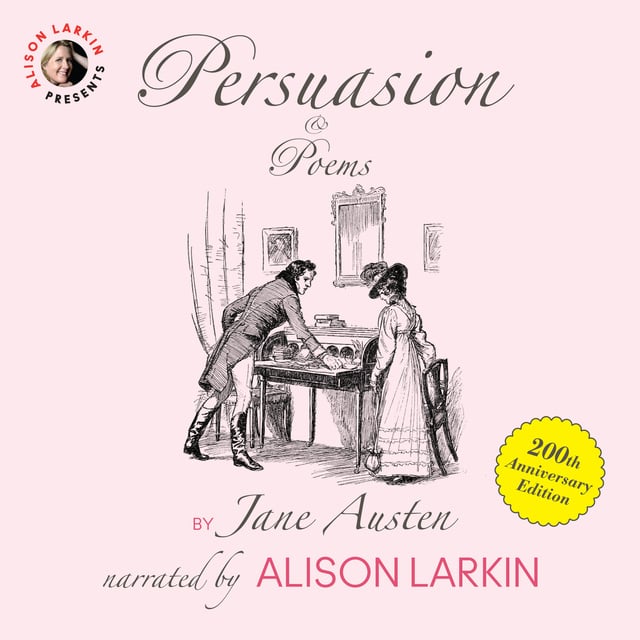 200 years since Jane Austen completed her last novel, Alison Larkin, a witty and always original voice, brings Persuasion and a selection of lesser known poems by Jane Austen to a new audience.
Seven years after Anne Elliot rejects the man she loves after a family friend persuades her that he isn't a good enough match for her, Frederick Wentworth returns to England looking for a wife.
Austen did not take herself seriously as a poet but she did write delightful, mostly comic verses to entertain family and friends.
Selected and introduced by award winning narrator Alison Larkin, the poems range from lines found on a piece of paper inside a tiny bag Austen gave to her niece in 1792, to her very last piece of writing - When Winchester Races - written three days before she died in July 1817.
"Raised in England by adoptive parents, Alison Larkin was actually born in America. She herself is a comic writer and performer—and she approaches Austen as a satirist—she has genuine theatrical skill... sustained comic creations. The voice reveals all." — The New Yorker
"There's a vintage feel to Alison Larkin's narration.. The bell-like quality of her sweetly accented voice harkens back to another, quieter, time. However, her delivery ... is contemporary and easy to hear..." - AudioFile Magazine
"As narrator, Larkin's voice is both commanding and sweet as she portrays the characters in Austen's final completed novel, PERSUASION.... Larkin's voice echoes the author's artistry."--Audiofile Magazine 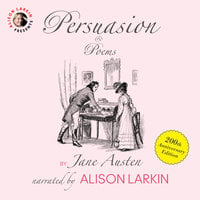