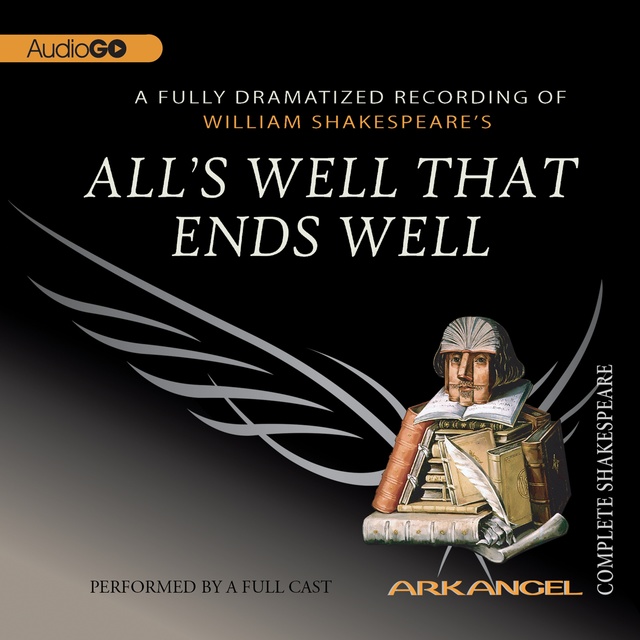 ACT I
Scene 1. Bertram, the young Count of Rossillion, is leaving home to take his place at the court of the King of France, who is gravely ill. Bertram bids farewell to his mother the widowed Countess, her friend the old lord Lafew and the young and virtuous Helena, daugther of a famous doctor now deceased, who lives as a dependent in the old Countess’ household. Helena is passionately in love with Bertram, though without hope because he is so far above her in birth. Parolles, a blustering soldier who has attached himself to Bertram, is also going to the French court and Helena determines to follow. She has learned the mysteries of medicine from her father; if she can cure the King, she may win Bertram’s heart.
Scene 2. The ailing King tells of war between the Florentines and Sienese; he will give permission to any young gentleman of France who wishes to go to Italy in search of glory. Bertram arrives and the King greets him warmly.
Scene 3. The Countess gently forces Helena to admit her love for Bertram and reveal her plan to attempt the King’s cure. The old lady kindly offers her support.

ACT II
Scene 1. Lafew announces the arrival at court of a young woman who claims to be able to heal the King. The King is deeply skeptical, but Helena persuades him to allow her to make the attempt. Should she succeed, the King is to grant her the husband of her choice.
Scene 2. The Countess’ fool Lavatch is to be sent to the court. He claims that he has a response that will serve him in all social situations, but the Countess exposes his folly.
Scene 3. Helena has restored the King to joyful health. He offers her the hand in marriage of any of the young lords at court, but when she chooses Bertram he recoils in horror. Angrily, the King commands Bertram to wed Helena instantly. The marriage takes place, but Bertram vows that he will never sleep with his bride and determines to steal away to the Italian wars at once.
Scene 4. Helena receives a letter from Bertram telling her that he has been called away and ordering her to take leave of the King.
Scene 5. Lafew warns Bertram that Parolles is a hollow sham. Helena enters and Bertram dismisses her curtly, instructing her to return to the Countess.

ACT III
Scene 1. The Duke of Florence prepares to welcome the young Frenchmen who come to fight on his behalf.
Scene 2. Helena has received a letter from Bertram: until she can get the ring from his finger, which he has vowed never to remove, and produce a child that she has conceived by him, she will never be able to call him husband.
Scene 3. The Duke of Florence, impressed by Bertram’s military promise, has given him an important command.
Scene 4. The Countess has received a letter from Helena telling her that she has gone on a pilgrimage to atone for her sin in aspiring to Bertram’s love and freeing him from his responsibility for her. The Countess bitterly deplores her son’s arrogance and blindness.
Scene 5. Helena has come to Florence where she meets a kindly widow and her beautiful daughter, Diana. The widow tells her that Bertram has fought heroically in the war but also that he has been attempting to seduce Diana.
Scene 6. The French soldiers hatch a plot to convince Bertram of Parolles’ cowardliness; pretending to be enemy soldiers, they will capture him, then see if he is prepared to betray his friends.
Scene 7. Helena, too, is setting a plot. Diana is to pretend to yield to Bertram’s suit on condition that he give her his ring. She is then to agree to an assignation in the dark, at which Helena will take her place.

ACT IV
Scene 1. Parolles is “captured” according to plan. He immediately offers to betray the Florentines and is blindfolded and taken off for interrogation.
Scene 2. Bertram woos Diana, who will yield only if he will giver her his ring. Bertram is reluctant but such is his passion for the girl that he agrees. Diana tells him to come to her chamber at midnight.
Scene 3. News has reached Bertram that Helena is dead; his friends condemn his hard-heartedness. The plotters interrogate Parolles. He begs them to spare his life and gives up the secrets of the army, slandering various Frenchmen, including Bertram, as he does so. At length his blindfold is removed and the plot revealed: Parolles’ true character has been exposed.
Scene 4. Helena’s subterfuge has succeeded and she is now pregnant with Bertram’s child, though he believes it was Diana whose bed he shared. She resolves to return to France, and Diana and the widow agree to accompany her.
Scene 5. In Rossillion, Lafew tells the old Countess of the exposure of Parolles. Bertram is expected home at any moment and news arrives that the King of France is also on his way to the Countess’ house.

ACT V
Scene 1. Meeting a French gentleman on the road, Helena gives him a letter to be delivered to the King of France.
Scene 2. Parolles humbles himself before Lafew, confessing that the old Lord was the first to see through him.
Scene 3. The King forgives Bertram for his cruel treatment of Helena, which the young Count seems to repent. The King recognizes a ring on Bertram’s finger as one which he hemself had previously given to Helena; Bertram denies this, saying that he had it from a woman in Florence. The french gentleman delivers Helena’s letter: this relates that Bertram has seduced Diana, then abandoned her—Diana herself is present and wishes to appeal to the King. Diana is summoned and Bertram dismisses her as a common prostitute, though admitting he has slept with her and that it was she who gave him the ring the King has recognized; Diana meanwhile, insists that she is still a virgin. The King does not know what to believe until, to the astonishment of all, Helena appears. She has the ring from Bertram’s finger and is pregnant with his child; the “impossible” conditions have been met and Bertram vows to love his wife “ever, ever dearly.” 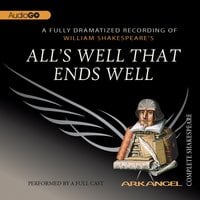