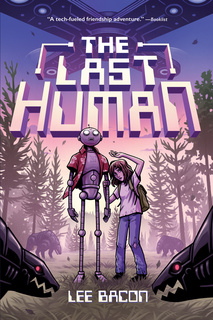 Author: Lee Bacon
Format: As e-book
English
2.8
Soon to be a major motion picture from the producers of Spider-Man: Into the Spider-Verse! In a future when humans are believed to be extinct, what will one curious robot do when it finds a girl who needs its help?

In the future, robots have eliminated humans, and 12-year-old robot XR_935 is just fine with that. Without humans around, there is no war, no pollution, no crime. Every member of society has a purpose. Everything runs smoothly and efficiently. Until the day XR discovers something impossible: a human girl named Emma. Now, Emma must embark on a dangerous voyage with XR and two other robots in search of a mysterious point on a map. But how will they survive in a place where rules are never broken and humans aren’t supposed to exist? And what will they find at the end of their journey?

The Peculiar Incident on Shady Street

Once Upon the End

The Secret of the Fiery Chamber

The Madman of Black Bear Mountain

The Canterwood Crest Stable of Books: Take the Reins

Lucy and Emma Celebrate Their Birthdays