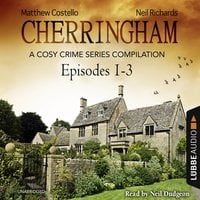 Cherringham—a quiet town in the Cotswolds. Nothing ever happens there, or so it seems—until one morning a woman’s body is found in the river. A terrible accident, according to the police. But is this true? Sarah believes there must be more to it. In Jack, a former NYPD homicide detective, she finds a partner who is willing to start investigating with her. They soon find out that things are not as clear as the police want them to be … This first of many cases brings Sarah and Jack together in an unlikely partnership.

Mystery at the Manor

The elderly owner of Mogdon Manor, Victor Hamblyn, dies in a mysterious fire. But was it really an accident? Jack and Sarah are skeptical. The victim’s three middle-aged children, who all live in the village of Cherringham, are possible heirs—and possible murderers. Did one of them set the fire?

Just two weeks remain before the Cherringham Charity Christmas Concert, and choir rehearsals are in full swing. Then the worst thing happens: Kirsty Kimball, one of the singers, is found dead from a severe allergic reaction to one of the home-made rehearsal cakes. Jack is pulled in to help bolster the depleted choir—and soon he’s convinced that Kirsty’s death was no accident. Sarah agrees, and the two of them are soon immersed in the jealousies, rivalries, and passions of Cherringham’s Rotary Club choir.