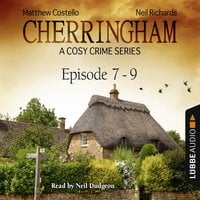 The Body in the Lake

Cherringham parish council has invited Laurent Bourdain, the mayor of a French village on the Brittany coast, to a gala reception to join the two villages in a mutually beneficial “twinning”. The venue: Lady Repton’s manor house, which her grandson hopes to turn into a world-class conference center. An elaborate dinner worthy of the French dignitary has been prepared. But as the night wears on, and the wine flows, the mayor will vanish from the celebration, only to be found floating dead in the nearby lake. An accident it would appear—until Jack and Sarah start to piece together what really happened to the body in the lake.

One of the worst blizzards in years hits Cherringham, cutting the village off from the rest of the world. Just outside town, in a gothic mansion behind towering walls, stands Broadmead Grange, a struggling retirement home. One of the home’s residents, poor old Archy, becomes Cherringham’s latest victim after he loses himself out among the snow drifts. Did Archy really just fall victim to the elements, or was foul play involved? Jack and Sarah take on the case to dig up the truth.

When the Cherringham Drama Society invites a local television celebrity to direct their Christmas show, they get more publicity than they bargained for. Someone’s out to sabotage the event, and rehearsals spin into chaos. Jack and Sarah are asked to investigate and soon discover that there’s a darker mystery taking place behind the scenes …