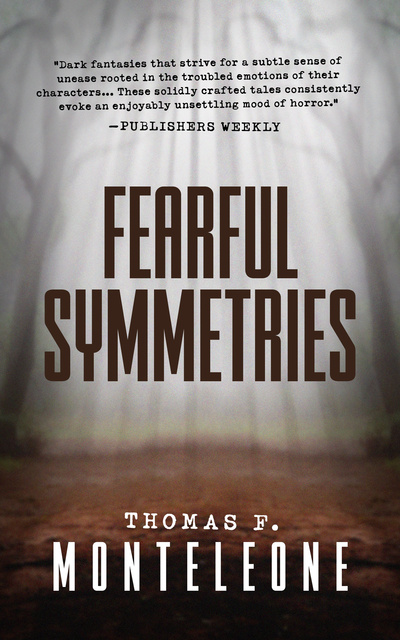 Thomas F. Monteleone displays his mastery of the horror genre in the selected short fiction of Fearful Symmetries, collected works spanning more than twenty years of his career. Revel in the deftly deployed classic horror tropes of these twenty-six stories, from their Love craftian monsters and archetypal vampires to Bradbury-esque mysteries and Twilight Zone-type tales.

In “The Night Is Freezing Fast,” a mysterious hitchhiker emerges from a white-out winter storm, following a boy and his grandfather into an ever-more dangerous evening. “Love Letters”—written as a series of letters from a backwoods Pennsylvanian farmer, a private investigator, and an adult pen pal service—subtly instills psychological suspense into the epistolary form. From celebrity-hunting vampires in “Triptych di Amore” to Lovecraftian behemoths in “Yog Sothoth, Superstar,” there’s a skillfully told trope for every horror reader.

With a wry author’s note accompanying each story, and an introduction from the late Rick Hautala, the Bram Stoker Award–winning Fearful Symmetries thrills and disturbs with its twisted tales.

“Monteleone has a dark imagination, a wicked pen, and the rare ability to convey an evil chill with words.” —Dean Koontz, New York Times–bestselling author

“Tom’s an expert storyteller.” —F. Paul Wilson, author of The Keep and Deep as the Marrow

“A vastly entertaining novel of horror and suspense [that poses] difficult questions about the nature of man, God and the devil.” —Los Angeles Daily News

“The story is irresistible, moving to a mighty climax.” —The New York Times