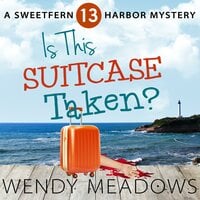 Is this Suitcase Taken?

An amateur sleuth B&B owner, a weekend wedding, and a dead body in a suitcase. Another murder mystery in the cozy beach town of Sweetfern Harbor…

Brenda Rivers welcomes guests to Sheffield Bed and Breakfast with her Reservationist, Allie Williams. In the meantime, everyone is excited for the wedding of Brenda’s father and her Chef scheduled for that afternoon. Allie greets the booked guests and takes note of one who hits her the wrong way. Patrick Anderson is outspoken and rude. Few, if any in his life, like him.

Most of the weekenders decide to attend the wedding except for Patrick, Rick Dawson, Carrie Porter and Daniel Swift. Each voice courteous reasons and they leave to pursue interests along the shoreline below the bed and breakfast or in Sweetfern Harbor shops. As the wedding celebrations begin after the ceremony, Detective Mac Rivers is called to the Precinct. A dead body has been left at the back door of the Police Station. Inside the over-sized footlocker are the remains of Patrick Anderson.

It doesn’t take Brenda long to discover one of her guests, Alexandra Cornell, possesses fleeting personalities. Alexandra finally admits she witnessed Patrick’s murder from her perch on the seawall during the celebrations. Brenda decides that Alexandra’s changeable moods is the culprit of Brenda’s doubts about her story. When Daniel Swift is fingered in the crime, he must prove his vowed innocence against someone who vouches seeing him commit the murder. Just as Brenda and Mac begin to hone in on the true killer, they discover one guest is missing. Alexandra mentions he is running away but gives no reason.

Brenda must decide who killed Patrick and who assisted in the deed. Rick Dawson is missing, Daniel swears he is innocent, and Alexandra is too fragile to win against an athletic man like Patrick Anderson. Above all, the questions become who to believe and where will the evidence lead them in solving this crime.