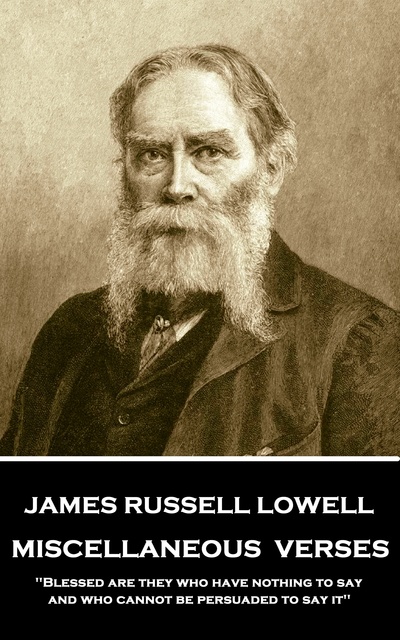 He attended Harvard College at age 15 from 1834, but failed to show any talent or dedication to learning which often caused disruption. After graduating, he attempted many careers including business, the ministry, medicine, and law. The latter gained him admittance to the bar in 1842.

Lowell's earliest poems were published in the Southern Literary Messenger in 1840.

In December 1844 Lowell married Maria White, shortly after he had published ‘Conversations on the Old Poets’, a collection of previously published essays.

He co-founded the literary journal The Pioneer, hoping to enjoy a regular income. The magazine ceased after three issues leaving him $1,800 in debt.

‘A Fable for Critics’ one of his most popular works, was published in 1848. It sold out quickly. The same year he published ‘The Biglow Papers’. It was cited as the most influential book of 1848.

His wife, Maria, who had suffered poor health for years, died on October 27th 1853 of tuberculosis.

Lowell was asked to deliver a lecture series. He accepted hoping it might bring him a sense of purpose. The first lecture, on January 9th, 1855, was on John Milton. It was a sell out.

He was offered the Smith Professorship of Modern Languages at Harvard. Lowell accepted if he could have a year of study abroad first. It was noted that Lowell had no natural inclination to teach. Lowell agreed, but retained his position for twenty years.

In the autumn of 1857, The Atlantic Monthly was established with Lowell as its first editor. In its first November issue he gave the magazine the stamp of high literature and of bold speech on public affairs.

With the outbreak of Civil War Lowell used his position to praise Abraham Lincoln. Lowell, generally a pacifist, wrote, "If the destruction of slavery is to be a consequence of the war, shall we regret it? If it be needful to the successful prosecution of the war, shall anyone oppose it?"

After Lincoln's assassination, Lowell delivered a poem at Harvard in memory of graduates killed in the war. The poem, ‘Ode Recited at the Harvard Commemoration, July 21, 1865’, was the result of a 48-hour writing binge.

‘Under the Willows and Other Poems’ was released in 1869.

Lowell resigned from his Harvard professorship in 1874, though continued to teach through 1877. He spent part of the 1880s delivering speeches. His last published works were mostly collections of essays, and a collection of his poems ‘Heartsease and Rue’ in 1888.

In the last few months of his life, during 1891, he struggled with gout, sciatica, and chronic nausea; by the summer doctors believed that Lowell had cancer in his kidneys, liver, and lungs, he was administered opium for the pain and was rarely fully conscious.