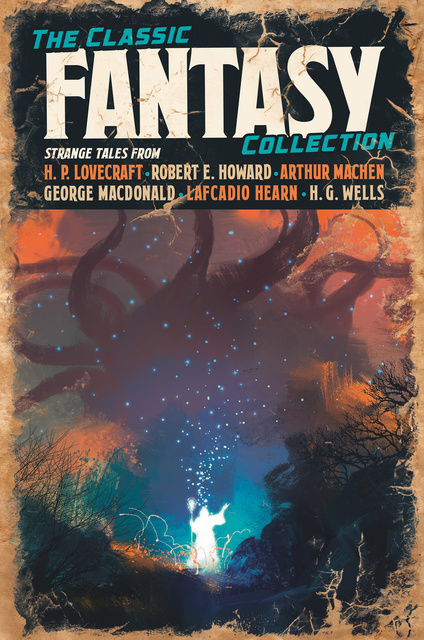 Epic romances, fearsome dragons and alien worlds lie between the pages of this volume. Containing more than 35 stories from the early masters of fantasy literature, the narratives here transport the reader to alternate worlds where magic abounds, cosmic terrors lie around the corner and intrepid heroes fight for justice.

Drawing inspiration from Norse, Japanese and Chinese mythology as well as from traditional fairytales and modern fears, the authors collected here span the breadth of the genre. Including tales from William Morris, H. G. Wells, Robert E. Howard and H. P. Lovecraft amongst others, they demonstrate the plethora of imaginative literature that was written in the late 19th and early 20th centuries. Many of these tales were foundational works, bringing ideas of the supernatural into the mainstream, and through their efforts creating entirely new genres.

Before Tolkien, there were many writers embracing the realm of fantastic fiction. The man responsible for its origin was George MacDonald (1824-1905), a Calvinist minister and Celtic scholar, who wrote the first true fantasy novel. He was followed by a number of imaginative successors at the end of the 19th century, including H. G. Wells, Arthur Machen, and Ernest Bramah. After the end of World War I, the pulp magazines opened up the genre to a new generation of writers - particularly H. P. Lovecraft and Robert E. Howard - who provided exciting, magical and horrifying tales that fascinated a multitude of readers. By the outbreak of World War II, the outlines of the fantasy genre had been sketched out by these pioneers, and an entirely new type of fiction had been created.