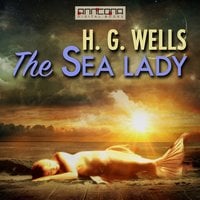 A mermaid contrives to have herself 'rescued from drowning' and adopted by a respectable family on the English coast. Her motive, which she conceals for quite a while, is to win the heart of a handsome but irresponsible young man whom she glimpsed when he went swimming in the Pacific.

Introduced into polite society as an invalid, she proves to be intelligent and charming, but as an immortal she regards the concerns of the English gentry with critical detachment. The young man, who is already engaged, falls under her spell and begins to doubt the importance of the political career into which his fiancée has been directing him.

There are, after all, 'other dreams.' But does his new relationship offer him any real future?

Couched in the language of fantasy and romance that blends with light-hearted social satire, The Sea Lady explores serious themes of nature, sex, the imagination, and the ideal in an Edwardian world in which moral restraints are loosening. Wells wrote in Experiment in Autobiography that The Sea Lady reflected his 'craving for some lovelier experience than life had yet given me.'

In its narrative structure, The Sea Lady plays cleverly with conventions of historical and journalistic research and verification.