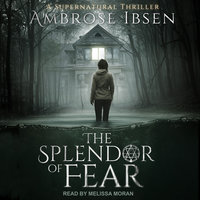 The Splendor of Fear

Something stirs in the town of Newsom's Landing . . .

Penny hates the outdoors, but when her boyfriend, Jared, plans a romantic weekend getaway in the woods, she decides to tag along.

The pair drive to a remote Kentucky campground with a strange and sordid history. Within the confines of the Swan Creek State Park are the ruins of a town abandoned under terrifying circumstances in the 19th century. The town of Newsom's Landing had been the site of the last-known witch trial in U.S. history, and the ghost of its defendant, the infamous Ellie Pomeroy, is said to still linger.

Arriving on the anniversary of Pomeory's murder, the pair find they have the entire park to themselves.

Something else is stalking the woods-watching in the night, wandering through the ruins. It brings a plague of hallucinatory terror wherever it goes, and before long, Penny and Jared can't parse reality from nightmare.

Lost in the woods, the pair are faced with a choice: Find a way to end the century-long curse, or be consumed by it-body and soul.