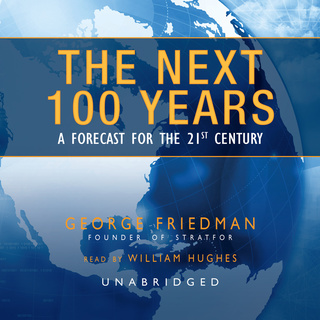 Författare: George Friedman
Inläsare: William Hughes
Format: Ljudbok
9T 42min
Engelska
3,86
A fascinating, eye-opening, and often shocking look at what lies ahead for the United States—and the world—from one of our most incisive futurists

George Friedman has become a leading expert in geopolitical forecasting, sought after for his unmatched grasp of both historical and contemporary trends. In The Next 100 Years, Friedman turns his eye to the future. Drawing on a profound understanding of geopolitical patterns dating back to the Roman Empire, he shows that we are now, for the first time in half a millennium, experiencing the dawn of a new historical cycle.

Friedman predicts that the US–Jihadist war will conclude, to be replaced by a second confrontation with Russia; China will undergo a major internal crisis, and Mexico will emerge as an important world power; there will be at least one global war, but armies will be smaller and wars less deadly; and technology will focus on space, both for military uses and for energy. This book is a compelling, eye-opening portrait of the future.
Mer info om ljudboken:
Förlag: Blackstone Publishing
Utgiven: 2009-01-27
ISBN: 9781481583183
9T 42min
Engelska
3,86
Kategori: Fakta

Bold: How to Go Big, Create Wealth and Impact the World

Who Owns the Future?

The Future Is Faster Than You Think: How Converging Technologies Are Transforming Business, Industries, and Our Lives

Summary of Guns, Germs, and Steel: The Fates of Human Societies by Jared Diamond