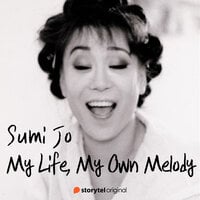 Korea's Own "Voice from Above" Tells Her Story

INCLUDES THE SINGLE "LIFE IS A MIRACLE" by Giovanni Allevi, Federico Paciotti and Sumi Jo

World's best bel canto soprano Sumi Jo tells the story of her own dramatic life in this candid autobiography. Out now both in Korean and English (*The Korean language version is narrated by the prima donna herself, and the English version by Erin Lee, a professional narrator.)

Storytel Korea exclusively brings you this fascinating story of the top class opera singer who celebrated the 35th anniversary of her international debut in 2021.

Hailing from Seoul, and having studied and secured international success in Italy, which she now calls her second home, Sumi Jo has been travelling around the world to share her songs with audiences everywhere for over 30 years, until coronavirus-19 made it impossible for her to do so in 2020. So she turned to writing and recording her first ever audio-autobiography with Storytel. In this story, she shares her perspective seasoned with her unparalleled international music career spanning over decades, as well as intimate personal stories about her family and encounters with other virtuosos - among them Herbert von Karajan, Lorin Maazel, and Zubin Mehta.

Chapters info:
Prologue
1. From Seoul With Love
2. To Rome With Love
3. Maestro, Maestra
4. Around the World in 8,000 days
5. Top of the World
6. Standing on Shoulders of Giants
7. Everyday Is Like Monday
8. Dogs and Humans
Epilogue

Sumi Jo has established herself as one of her generation’s most sought-after sopranos, praised for her outstanding musicianship and the remarkable agility, precision and warmth of her voice. She is the highest selling Classical singer in the world, with over 50 recordings to her credit, including a Grammy-winning Die Frau ohne Schatten with Sir Georg Solti for Decca London and Un Ballo in Maschera for Deutsche Grammophon under Herbert von Karajan. Her most recent disc, Mother (Universal Records), a collection of classical, crossover and folksongs dedicated to her mother, received Platinum Award certification in November 2019.

Now best known for her Grammy award-winning interpretations of the bel canto repertoire, Sumi made her European operatic debut as Gilda Rigoletto at the Teatro Comunale Giuseppe Verdi in Trieste in 1986. There followed a series of impressive house and role debuts, including Oscar Un ballo in maschera opposite Placido Domingo at the Salzburg Festival in 1987; Thetis Fentone at Teatro alla Scala, Barbarina Le nozze di Figaro at the Bayerische Staatsoper in 1988; debuts at the Wiener Staatsoper and the Metropolitan Opera as Gilda in 1989 and the Lyric Opera of Chicago as Queen of the Night and Olympia Les Contes d’Hoffmann at the Royal Opera House in 1990. Sumi has since been greeted consistently with exceptional accolades, by public and press alike, for performances in opera houses and concert halls throughout the world.

Sumi Jo is in constant demand as a performer and as special guest artist at gala concerts and events across the world, with recent appearances including the World Cup, the 2011 Asian Winter Olympics Opening Ceremony in Sochi, the International Olympic Games in Beijing and at the PyeongChang Paralympics Winter Games, where as an Honorary Ambassador she performed their official song “Here as One”. Sumi was also invited to sing for Pope Francis’s papal visit to South Korea in 2014.

Sumi celebrated the 30th anniversary of her international opera debut in the 2016-17 season, with performances across Australia (Canberra, Sydney, Brisbane and Melbourne), Manila, at the Stavros Niarchos Foundation Cultural Center Athens, Toulouse, Taipei and Pingtung with the Orchestre National du Capitole de Toulouse, a series of Maria Callas Tribute concerts with the Hong Kong Philharmonic and recitals in Clermont-Ferrand and Montreal. That season she also made guest appearances with the Montreal Symphony Orchestra conducted by Kent Nagano and with the New York Philharmonic Orchestra conducted by Long Yu for their Lunar New Year Concert at David Geffen Hall.

"July 2020, I was on a small boat to Ischia. I was to receive a prize from a global awards ceremony held at this small yet famous Italian resort island. I hadn't left my house in Rome for so long, as the coronavirus had hit Italy, where I live, particularly hard.

I boarded the boat in Naples. I liked the sea wind and the sunshine on my face. The Gulf of Naples blue is somewhat different from the deep prussian blue of the South Sea of the Korean Peninsula, but I've learned to appreciate the Naples blue too. I took my own selfie and posted it on Instagram, adding 'something good is gonna happen.' ..."