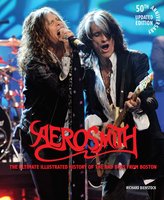 This ultimate illustrated history of Aerosmith—one of the greatest rock ‘n’ roll bands of all time and the best-selling American hard rock band of all time—is now revised and updated to celebrate the group’s 50th anniversary as well as their multi-year farewell concert tour.

This massive, visually exhilarating celebration in hardcover provides a front-row seat to the Boston Bad Boys’ entire career: scrapping their way cross-country in the 1970s, scrapping their way back to the top of the heap in the late 1980s, and scrapping with each other the entire way. Updated with 16 additional pages of text and photographs, this complete history of one of the world's most successful and popular bands features:

• Nearly 400 photos of the band on and off the stage, and images of rare memorabilia, including gig posters, backstage passes, ticket stubs, 7-inch picture sleeves, and more

• Advice from Steven Tyler and Joe Perry to young bands

• An Aerosmith discography encompassing all official audio and video releases

Aerosmith: The Ultimate Illustrated 50 Year History of the Boston Bad Boys is an awesome, must-have addition to the library of every Aerosmith fan.