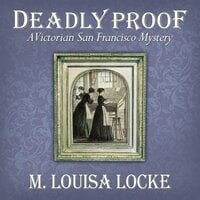 It’s the summer of 1880, and once again the lovely and inquisitive businesswoman, Annie Fuller, is helping San Francisco lawyer and fiancé, Nate Dawson, with a troublesome case. Nate’s client, a female typesetter accused of murdering her boss, refuses to help in her own defense. Complicating matters, Nate’s sister Laura insists on getting involved in the potentially dangerous investigation, while Laura’s friend Seth Timmons, troubled Civil War veteran, finds himself a witness for the prosecution.

Will Nate be able to win his first big case? Will Laura and Seth find some way of remaining friends? And finally, will Annie and Nate’s upcoming nuptials be derailed by their attempts to track down a killer?