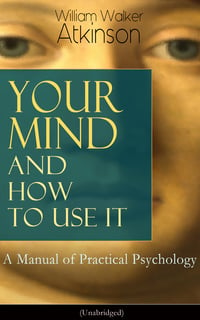 Your Mind and How to Use It: A Manual of Practical Psychology (Unabridged)

Your Mind and How to Use It: A Manual of Practical Psychology (Unabridged)

Author: William Walker Atkinson
Format: E-book
English
This carefully crafted ebook: "Your Mind and How to Use It: A Manual of Practical Psychology (Unabridged)” is formatted for your eReader with a functional and detailed table of contents.

The Science of Prosperity

The Lessons In Yogi Philosophy And Oriental Occultism (Unabridged)

The Principles Of Psychology (Vol. 1&2)

What I Know for Sure

The Group Mind: A Sketch Of The Principles Of Collective Psychology

The Everything Psychology Book: Explore the human psyche and understand why we do the things we do

Manipulation Techniques: The Complete Guide On How To Manipulate Anyone Ethically Through NLP, Mind Control And Persuasion

What Is Mob Mentality? - 8 Essential Books On Crowd Psychology

Journalism for Women: A Practical Guide

Dynamic Thought; Or, The Law of Vibrant Energy

The Psychology of Salesmanship