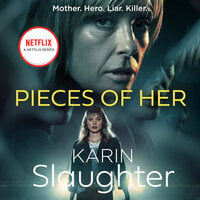 The gripping standalone thriller from Sunday Times No. 1 bestselling author Karin Slaughter, soon to be a Netflix series
A terrifying act of violence…
It takes a split second for your life to change forever. And for Andrea Oliver that split second is a mass shooting in her local mall.

A woman whose life is built on a lie…
But this shocking act is only the start. Because then, as the bodies fall around them, Andy’s mother Laura takes a step forward into the line of fire.

A fight for survival…
Hours later, Laura is in hospital, her face splashed over the newspapers. But the danger has only just begun. Now Andy must embark on a desperate race against time to uncover the secrets of her mother’s past before any more blood is shed…
Praise for the Number One bestselling author:
‘Passion, intensity, and humanity’ Lee Child

‘One of the boldest thriller writers working today’ Tess Gerritsen

‘Her characters, plot, and pacing are unrivalled’ Michael Connelly

‘Fiction doesn't get any better than this’ Jeffery Deaver

‘A great writer at the peak of her powers’ Peter James