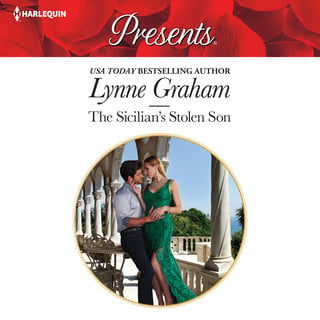 The only link Jemima Barber has to her troubled late twin sister is her nephew. So when the boy's father storms into their lives to reclaim the child that was stolen from him, Jemima lets the forbidding Sicilian believe she is her smooth seductress of a sister.

Though his son's mother might be gentler than Luciano Vitale remembers, he's resolved to make her pay in the most pleasurable way imaginable. But when he discovers she's a virgin, her secret is out! Now Luciano has a new proposal: Jemima can atone for her sister's sins—by becoming his wife!
Meiri upplýsingar um hljóðbókina:
Útgefandi: Harlequin Audio
Útgefið: 2020-06-30
ISBN: 9781488208959
4Klst. 34Mín
enska
3,33
Flokkur: Ástarsögur

A Bride for the Boss & Redeeming the Billionaire SEAL

Bought for the Greek's Revenge & The Greek's Nine-Month Redemption

Cowboy After Dark & Make Mine a Marine

Christmas with the Marine & Her Naughty Holiday

The Cost of the Forbidden

Pleasure, Pregnancy and a Proposition

The Greek Demands His Heir

The Secret His Mistress Carried

Cowboy All Night & A SEAL's Desire