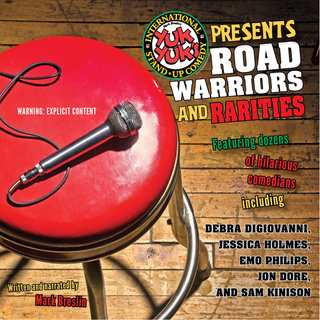 The set will also feature the stand-up comics whom Mark Breslin refers to as the “road warriors,” comedians who constantly criss-cross the country perfecting their craft and performing night after night in clubs from coast to coast. They may not all be household names yet, but they deliver some of the funniest material around.
Meiri upplýsingar um hljóðbókina:
Útgefandi: HarperCollins Publishers
Útgefið: 2011-11-04
ISBN: 9781443412681
5Klst. 8Mín
enska
4,6
Flokkur: Óskáldað efni
Húmor

Enemies of the People

Happy Endings: The Tales of a Meaty-Breasted Zilch

Yes, My Accent Is Real

No Wonder My Parents Drank: Tales from a Stand-Up Dad

Born Standing Up: A Comic's Life

The Funny Thing Is...

I'm Not a Terrorist, But I've Played One On TV: Memoirs of a Middle Eastern Funny Man

How to Cope with Mitchell and Webb

Dear Mrs. Fitzsimmons: Tales of Redemption from an Irish Mailbox