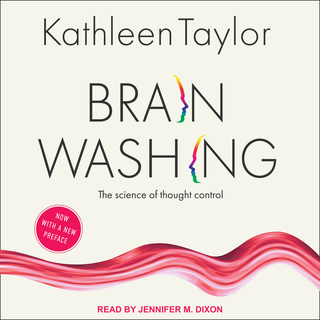 Höfundur: Kathleen Taylor
Lesari: Jennifer M. Dixon
Snið: Sem hljóðbók
15Klst. 2Mín
enska
2,71
Throughout history, humans have attempted to influence and control the thoughts of others. Since the word 'brainwashing' was coined in the aftermath of the Korean War, it has become part of the popular culture and been exploited to create sensational headlines. It has also been the subject of learned discussion from many disciplines: including history, sociology, psychology, and psychotherapy. But until now, a crucial part of the debate has been missing: that of any serious reference to the science of the human brain. Descriptions of how opinions can be changed, whether by persuasion, deceit, or force, have been almost entirely psychological.

In Brainwashing, Kathleen Taylor brought the worlds of neuroscience and social psychology together for the first time. In elegant and accessible prose, and with abundant use of anecdotes and case-studies, she examines the ethical problems involved in carrying out the required experiments on humans, the limitations of animal models, and the frightening implications of such research. She also explores the history of thought-control and shows how it persists all around us, from marketing and television, to politics and education.

The Left Brain Speaks and the Right Brain Laughs

The Secret Life of the Mind: How Your Brain Thinks, Feels, and Decides

The Knowledge Illusion: The myth of individual thought and the power of collective wisdom

Our Senses: An Immersive Experience

Social: Why Our Brains Are Wired to Connect

Range: How Generalists Triumph in a Specialized World

Cognitive Behavioral Therapy: A Guide To Managing Depression, Anxiety and Intrusive Thoughts With Highly Effective Tips and Tricks for Rewiring Your Brain and Overcoming Phobias

The Source: The Secrets of the Universe, the Science of the Brain

The Biological Mind: How Brain, Body, and Environment Collaborate to Make Us Who We Are