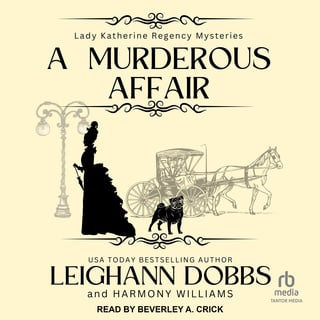 Höfundur: Leighann Dobbs, Harmony Williams
Lesari: Beverley A. Crick
Snið: Hljóðbók
6Klst. 53Mín
enska
4,07
Lady Katherine juggles Christmas festivities, a perplexing cold case, and a wager with the annoying Captain Wayland that will prove once and for all which of them is the better detective.

It's the Christmas season in London, but the holiday festivities don't deter Lady Katherine from investigating a death that happened months earlier. Since the victim was a maid, investigative resources were sparse, and the police hastily wrote it off as a random killing. But Lady Katherine and her friends believe it was nothing short of premeditated murder, and they vow to seek justice.

With her Bow Street Runner friend Lyle acting as a neutral party, Katherine teams up with her friend Prudence Burwick, her maid Harriett, and of course her pug Emma. Wayland has the aid of Pru's fiance Lord Annandale and his valet McTavish.

The two teams race against each other in a hunt for clues that takes them through the servants' quarters, stables, and seedy underbelly of London in search of a dangerous killer who thinks they got away with murder.

Death in the English Countryside