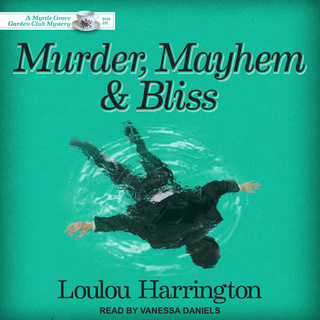 Höfundur: Loulou Harrington
Lesari: Vanessa Daniels
Snið: Sem hljóðbók
9Klst. 30Mín
enska
4
Nothing much happens in Myrtle Grove, Oklahoma. So when prominent businessman Harry Kerr is discovered face down in his pool shortly after dawn, the breakfast crowd in Jesse Camden's tearoom is buzzing. Recognizing the name, Jesse hurries to her friend Vivian Windsor, Myrtle Grove's resident oil heiress. Vivian is the great-aunt to Bliss Kerr, widow of the deceased and soon-to-be prime suspect in his suspicious death.

Clearing Bliss and finding the real murderer isn't what Jesse means when she offers her assistance. And wrangling an eager band of helpers while chasing a tangle of leads across the countryside, tripping over deputies and evidence along the way, isn't her first choice for her weekend. But here she is, and here she will be, hearing secrets no one should know, and discovering betrayals no one could live with, until Jesse finds her way through the maze of deceit to uncover the real killer.
Meiri upplýsingar um hljóðbókina:
Útgefandi: Tantor Audio
Útgefið: 2019-06-11
ISBN: 9781400170654
9Klst. 30Mín
enska
4
Flokkur: Glæpasögur
Glæpasaga Mjúkar glæpasögur

Murder on a Silver Sea

Granny's Got a Gun

Cappuccinos, Cupcakes, and a Corpse

The Path of the Crooked