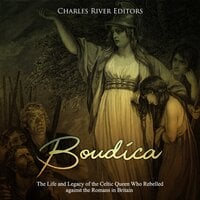 Boudica: The Life and Legacy of the Celtic Queen Who Rebelled against the Romans in Britain

The famous conqueror from the European continent came ashore with thousands of men, ready to set up a new kingdom in England. The Britons had resisted the amphibious invasion from the moment his forces landed, but he was able to push forward. In a large winter battle, the Britons’ large army attacked the invaders but was eventually routed, and the conqueror was able to set up a new kingdom.

Over 1,100 years before William the Conqueror became the King of England after the Battle of Hastings, Julius Caesar came, saw, and conquered part of “Britannia,” setting up a Roman province with a puppet king in 54 BCE. In the new province, the Romans eventually constructed a military outpost overlooking a bridge across the River Thames. The new outpost was named Londinium, and it covered just over two dozen acres.

The Romans were master builders, and much of what they built has stood the test of time. Throughout their vast empire they have left grand structures, from the Forum and Pantheon in Rome to the theatres and hippodromes of North Africa and the triumphal gates in Anatolia and France. Wherever they went, the Romans built imposing structures to show their power and ability, and one of their most impressive constructions was built on the northernmost fringe of the empire. Shortly after the emperor Hadrian came to power in the early 2nd century CE, he decided to seal off Scotland from Roman Britain with an ambitious wall stretching from sea to sea. To accomplish this, the wall had to be built from the mouth of the River Tyne – where Newcastle stands today – 80 Roman miles (76 miles or 122 kilometers) west to Bowness-on-Solway. The sheer scale of the job still impresses people today, and Hadrian’s Wall has the advantage of being systematically studied and partially restored.

One of the reasons the wall existed was to protect against enemies, and given what happened in the mid-1st century CE, the Romans’ fears was understandable. Indeed, Londinium had become the largest city in Britannia shortly before being burned down in a native revolt led by an infamous Celtic Iceni queen named Boudica.

With a name meaning “Victory,” Boudica was a charismatic woman who commanded nearly 100,000 Celts and led them on a campaign to expel the Roman overlords from Britain around the year 61 CE. Often called the “Celtic Queen,” she wore a warrior’s necklace around her delicate neck and rode upon a sturdy steed. According to the ancient historian Cassius Dio, “In stature, she was very tall, in appearance most terrifying, in the glance of her eye most fierce, and her voice was harsh.” It is said she had a piercing glare that could shrink her people’s enemies, which in this case were the Roman legionnaires under the vengeful general Suetonius.

Boudica was not only a woman of high intelligence but also a Druid priestess of great repute, which caused the Romans a unique kind of concern. The Celts have fascinated people for centuries, and the biggest fascination of all has been over the Druids, a religious class at the heart of Celtic society that wielded great power. While Boudica fought for freedom, the Romans were willing to fight just as hard for the wealth of the Celtic resources, including troves of gold, silver, and tin. The Romans wanted the various groups of Britain to become Roman vassals, pay taxes, adopt the Roman system of governance, and become like slaves in service of Rome’s extravagance.

As a result, the uprising would be bitterly contested, and though the Romans emerged victorious, Boudica remains a towering figure in the minds and hearts of the Celts and the British today. She lived and died, but she achieved historic immortality, and a bronze sculpture sits on the embankment of the Thames River near Westminster Bridge memorializing the queen.