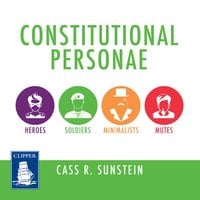 Since America's founding, the U.S. Supreme Court had issued a vast number of decisions on a staggeringly wide variety of subjects. And hundreds of judges have occupied the bench. Yet as Cass R. Sunstein, the eminent legal scholar and bestselling co-author of Nudge, points out, almost every one of the Justices fits into a very small number of types regardless of ideology: the hero, the soldier, the minimalist, and the mute. Heroes are willing to invoke the Constitution to invalidate state laws, federal legislation, and prior Court decisions. They loudly embrace first principles and are prone to flair, employing dramatic language to fundamentally reshape the law. Soldiers, on the other hand, are skeptical of judicial power, and typically defer to decisions made by the political branches. Minimalists favor small steps and only incremental change. They worry that bold reversals of long-established traditions may be counterproductive, producing a backlash that only leads to another reversal. Mutes would rather say nothing at all about the big constitutional issues, and instead tend to decide cases on narrow grounds or keep controversial cases out of the Court altogether by denying standing.

As Sunstein shows, many of the most important constitutional debates are in fact contests between the four Personae. Whether the issue involves slavery, gender equality, same-sex marriage, executive power, surveillance, or freedom of speech, debates have turned on choices made among the four Personae― choices that derive as much from psychology as constitutional theory.

Sunstein himself defends a form of minimalism, arguing that it is the best approach in a self-governing society of free people. More broadly, he casts a genuinely novel light on longstanding disputes over the proper way to interpret the constitution, demonstrating that behind virtually every decision and beneath all of the abstract theory lurk the four Personae. By emphasizing the centrality of character types, Sunstein forces us to rethink everything we know about how the Supreme Court works.

"Cass Sunstein provides an enlightening look at the different ways to approach the Constitution. In doing so, he transcends ideology and helps us appreciate different perspectives. He also shows the virtue of his own favorite approach, that of minimalism, which seeks to respect traditions and long-settled practices." - Walter Isaacson, President and CEO of the Aspen Institute, and author of The Innovators

"In this remarkable addition to Oxford University Press' 'Inalienable Rights' series on the American Constitution, Cass Sunstein persuasively speaks not to theories of constitutional interpretation, but to four archetypical judicial personalities reflected in opinion-writing, and in doing so he opens up an imaginative new perspective for appreciating our constitutional history." - Peter L. Strauss, Betts Professor of Law, Columbia Law School

"In Constitutional Personae, Cass Sunstein analyzes judicial review in the United States in terms of four personalities or archetypes. He shows how this model illuminates a wide range of questions, and he offers a subtle restatement and defense of his favorite persona, the constitutional minimalist. Filled to the brim with insights, this is a splendid and imaginative contribution to constitutional theory." - Jack Balkin, Knight Professor of Constitutional Law, Yale Law School

"[A] valuable study of the different approaches that Supreme Court justices take in deciding cases...Given the significance of recent Supreme Court decisions on such issues as campaign finance, health care coverage, and marriage equality, Sunstein has performed a public service by enabling a better comprehension of how these judgments are reached." - Publishers Weekly

"Constitutional Personae has all sorts of treasures in it. Its classifications are illuminating." - The New York Review of Books