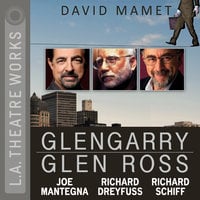 A group of low-ranking real estate salesmen are trying to survive in a cut-throat office culture. But when two of them devise a plot to redress the company’s wrongs, the resulting turmoil increases the pressure to unbearable levels. Winner of the 1983 Laurence Olivier Award, 1984 Pulitzer Prize for Drama, and 2005 Tony Award for Best Revival of a Play.

Directed by Eric Simonson. Recorded in Los Angeles before a live audience at The James Bridges Theater, UCLA in May of 2013.

First presented at the Cottlesloe Theatre, London, England, on September 21, 1983. The United States premiere took place at the Goodman Theatre in a Chicago Theatre Groups production on February 6, 1984, and opened on Broadway at the John Golden Theatre on March 25, 1984, presented by Elliott Martin, the Shubert Organization, Arnold Berhard, and the Goodman Theatre.