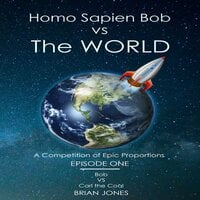 Homo Sapien Bob vs The World: A Competition of Epic Proportions

Homo Sapien Bob vs the World is an adventure of epic proportions. Mother Earth can’t understand why all of Earth’s Entities can’t get along the fish, the trees, the clouds, the mountains all seem to work it out throw in one Homo Sapien, and all hell breaks loose.

The ultimate competition between Homo Sapiens and Earth entities begins when they compete to see who adds more value to their presence on Earth. The winner gets to stay on the planet, and the loser well, let’s say outer space will start to get a little more crowded. We have a rocket, and who doesn’t love rockets.

Rex and Iggy are responsible for setting up and running these competitions, where all the craziness begins at World Mastermind Headquarters. Many characters like Mother Nature, Father Time, Meco, Scientists, rhinoceros, the whistler, and even Einstein, make a brief appearance and a host of others, each one crazier than the next.

What about Bob? He’s in the title, and yes, we have many Bob’s in fact, lots and lots of Bob’s. Bob’s are like lightbulbs interchangeable.

We have judges music songs and a ton of humor to make this the ultimate Bob adventure. So if you like Competition Elimination Rockets Outer Space and Bye-Bye, you are going to love this whale of a tale.

Sit back and be entertained and enjoy the ultimate Bob experience with Homo Sapien Bob vs The World. Cheers