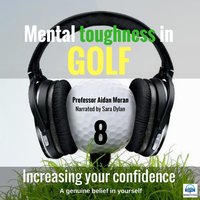 Written by Professor Aidan Moran. Aidan is Director of the Psychology Research Laboratory in University College, Dublin. Aidan’s work for the last twenty years has included one to one coaching on mental toughness with top players including Major winners. Narrated by Sara Dylan

Golf is often described as a “confidence” game because in order to play to to the best of your ability, you need to believe that you can execute key skills such as driving, chipping and putting accuratey when it really matters. Unfortunately, if you’re like most golfers, it’s all too easy for your mind to dwell on the flaws in your game and what you did wrong rather than on what you enjoyed or did well on the course.

However, by keeping track of small and gradual improvements in your game, your self-belief will grow and build resilience in the face of pressure. That’s why Jack Nicklaus claimed that confidence is the golfer’s “primary weapon” on the course. And he should know. After all, he has won more Majors than any other player in history. In the last of these victories, at the 1986 US Masters in Augusta when Nicklaus was 46 years old, he birdied 6 of the last 9 holes to win the tournament by one stroke. Subsequently, in his autobiography, he said that “a genuine belief in yourself is the top requirement for winning golf tournaments”.

Not surprisingly, this observation applies to players of all levels. For example, sinking a difficult putt early in a round can generate a psychological momentum which carries you through later holes – perhaps even until the final green. By contrast, missing a short putt can sow the seeds of self-doubt in your mind – and erode your confidence on the green for many holes afterwards. Clearly, it’s not just your skills that are tested in competitive golf … your belief in those skills is also challenged.