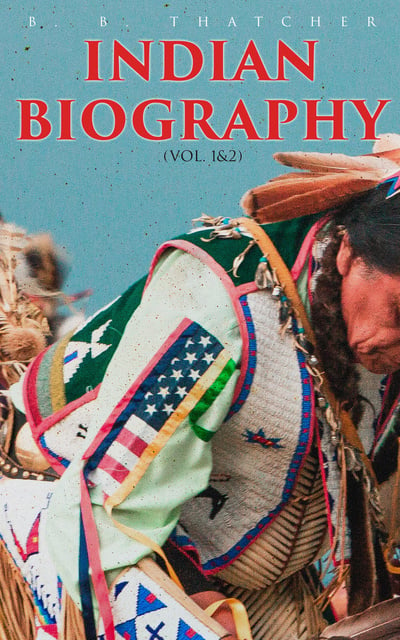 Höfundur:
B. B. Thatcher
Rafbók

Höfundur: B. B. Thatcher Rafbók

"Indian Biography" in 2 volumes is a historical and biographical account of people who have been distinguished among the North American natives as orators, warriors, statesmen, and other remarkable characters.

This carefully crafted eBook is formatted for eReaders with a functional and detailed table of contents.

The Indian tribes of Virginia at the date of the Jamestown settlement; their names, numbers and power

Conduct of Powhatan after Smith's departure for England, and causes of it

Peace finally effected by the capture of Pocahontas

Marriage of Pocahontas with John Rolfe…

The family of Powhatan

Sequel of the history of Pocahontas

Her acts of kindness to the colonists at various times, and especially to Smith

Sequel of the history of Opechancanough

Biography of other Virginian chieftains

Plot of the latter against the Hatteras colony

Notices of Indians who submitted to Massachusetts

Farther account of Master Weston's settlement, and the movements of the Indians against him

Provocations from the English

Magnanimous revenge of the Sachem…

Their negotiations with the French, in 1684

History of the Five Nations continued to the time of Adario

War between the Confederates and the French

Account of a council of the Confederates at Onondaga, in 1690

Speeches of Sadekanatie and other orators

Hostility of the northern tribes to the English, after the conquest of Canada

Supposed feelings of Pontiac towards the English

His great project of combination…