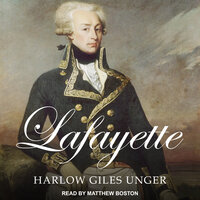 In this gripping biography, acclaimed author Harlow Giles Unger paints an intimate portrait of the heroic young French soldier who, at nineteen, renounced a life of luxury in Paris and Versailles to fight and bleed for liberty-at Brandywine, Valley Forge, and Yorktown. A major general in the Continental army, he quickly earned the love of his troops, his fellow commanders, and his commander in chief, George Washington, who called him his "adopted son."

Unger follows Lafayette from the battlefields of North America to the palace of Versailles, where the marquis won the most stunning diplomatic victory in world history-convincing the French court to send the huge military and naval force needed to win American independence. He then returned to America to lead the remarkable guerrilla campaign in Virginia that climaxed with British surrender at Yorktown.

Lafayette's triumph turned to tragedy, however, when he tried to introduce American democracy in his native land. His quest for a constitutional monarchy unwittingly set off the French Revolution and plunged Europe into more than a decade of slaughter and war. Declared an enemy of the state, Lafayette fled France only to be imprisoned for five years in an Austrian dungeon, while his wife, Adrienne, and her family festered in prison, awaiting the cruel blade of the guillotine.