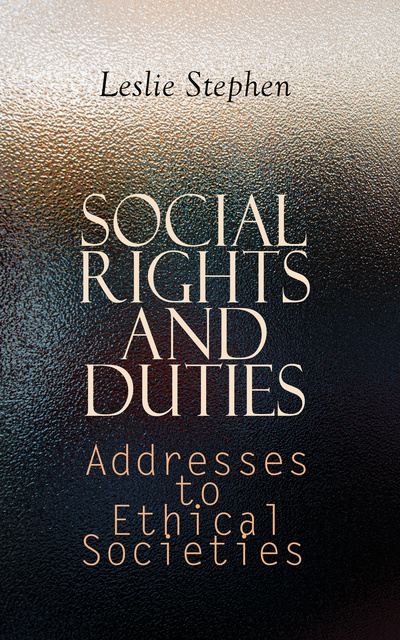 "Social Rights and Duties" in 2 volumes is one of the best-known works by the English historian and humanist Leslie Stephen.

This carefully crafted e-artnow eBook is formatted for eReaders with a functional and detailed table of contents.

"We are told often enough that we are living in a period of important intellectual and social revolutions. In one way we are perhaps inclined even to state the fact a little too strongly. We suffer at times from the common illusion that the problems of to-day are entirely new: we fancy that nobody ever thought of them before, and that when we have solved them, nobody will ever need to look for another solution. To ardent reformers in all ages, it seems as if the millennium must begin with their triumph, and that their triumph will be established by a single victory. And while some of us are thus sanguine, there are many who see in the struggles of to-day the approach of a deluge which is to sweep away all that once ennobled life. The believer in the old creeds, who fears that faith is decaying, and the supernatural life fading from the world, denounces the modern spirit as materializing and degrading. The conscience of mankind, he thinks, has become drugged and lethargic; our minds are fixed upon sensual pleasures, and our conduct regulated by a blind struggle for the maximum of luxurious enjoyment. The period in his eyes is a period of growing corruption; modern society suffers under a complication of mortal diseases, so widely spread and deeply seated that at present there is no hope of regeneration. The best hope is that its decay may provide the soil in which seed may be sown of a far-distant growth of happier augury."

The Aims of Ethical Societies

The Sphere of Political Economy

The Morality of Competition

Ethics and the Struggle for Existence

The Duties of Authors

The Vanity of Philosophizing