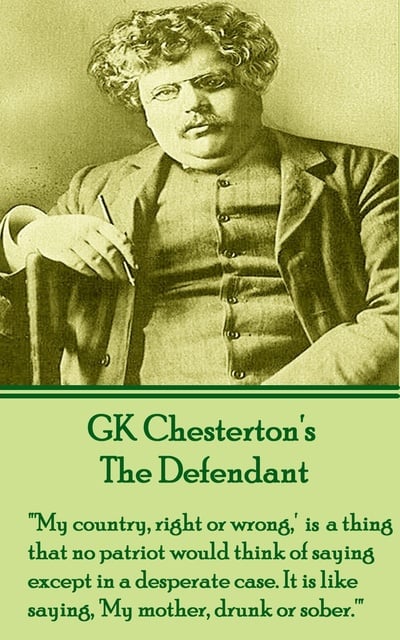 The Defendant: "'My country, right or wrong,' us a thing that no patriot would think of saying except in a desperate case. It is like saying, 'My mother, drunk or sober.'"

The Defendant: "'My country, right or wrong,' us a thing that no patriot would think of saying except in a desperate case. It is like saying, 'My mother, drunk or sober.'"

Gilbert Keith Chesterton, (29 May 1874 – 14 June 1936) was a poet, novelist, playwright, literary commentator, editor, biographer, journalist, orator and theologian. He was often dubbed as the “prince of paradox” for his light whimsical style that often addressed serious issues such as politics and religion. The latter was as a member and defender of the Christian faith and the former was shaped by a distrust of concentrated wealth and power. He advocated Distributionism and said that every man should be allowed to own "three acres and a cow." These political views have spread round the world, crediting Chesterton as the father of the “small is beautiful” movement. It is also said to have influenced Gandhi in seeking a genuine nationalism for India rather than imitating the British state. As one of the world’s most prolific writers, his main claim to fame is as the creator of Father Brown, but Chesterton’s style and ideas in this work reveals a truth that makes it remarkably contemporary and relevant to the modern reader. This is clearly demonstrated in “The Defendant” which takes to defending condemned or overlooked things, from farce to humility, nonsense to useful information, baby-worship to skeleton and ultimately optimism. As Chesterton refers to them, it is true of his words, they are "diamonds in the dustheap"