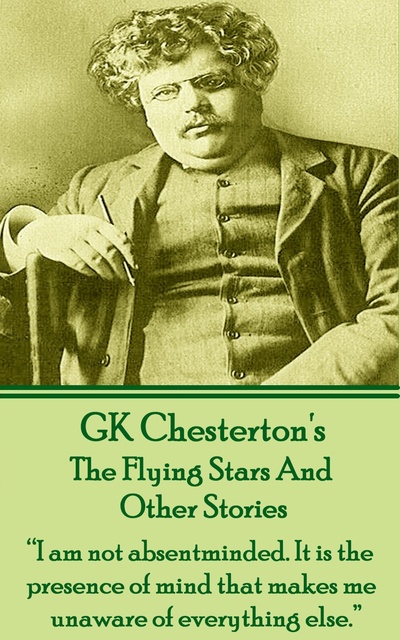 The Flying Stars And Other Stories: “I am not absentminded. It is the presence of mind that makes me unaware of everything else.”

The Flying Stars And Other Stories: “I am not absentminded. It is the presence of mind that makes me unaware of everything else.”

The short story is often viewed as an inferior relation to the Novel. But it is an art in itself. To take a story and distil its essence into fewer pages while keeping character and plot rounded and driven is not an easy task. Many try and many fail. In this series we look at short stories from many of our most accomplished writers. Miniature masterpieces with a lot to say. In this volume we examine some of the short stories of GK Chesterton. Gilbert Keith Chesterton was born in Campden hill, Kensington on May 29th 1874. Originally after attending St Pauls School he went to Slade to learn the illustrators art and literature. In 1896 he joined a small London publisher and began his journalistic career as a freelance art and literary critic. In 1901 he married Frances Blogg, to whom he remained married for the rest of his life. Thereafter he obtained weekly columns in the Daily News and The Illustrated London News. For many he is known as a very fine novelist and the creator of the Father Brown Detective stories which were much influenced by his own beliefs. A large man – 6’ 42 and 21st in weight he was apt to be forgetful in that delightful way that the British sometimes are – a telegram home to his wife saying he was in one place but where should he actually be. But he was prolific in many other areas; he wrote plays, essays, loved to debate and wrote hundreds of poems. But in this volume we concentrate on his short stories especially those concerning a certain Father Brown. Chesterton died of congestive heart failure on 14th June 1936 and is buried in Beaconsfield just outside of London. Many of these stories are also available as an audiobook from our sister company Word Of Mouth. Many samples are at our youtube channel http://www.youtube.com/user/PortablePoetry?feature=mhee