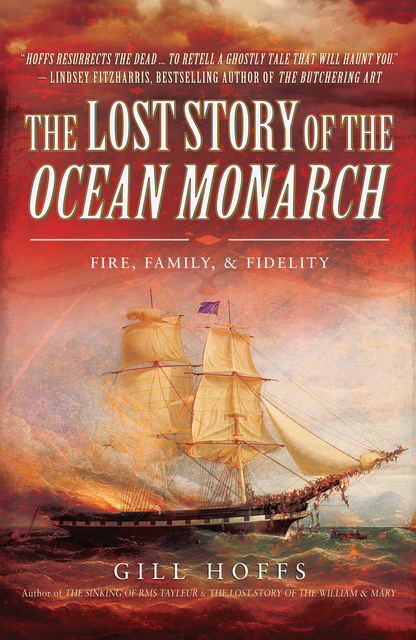 The Lost Story of the Ocean Monarch: Fire, Family, & Fidelity

The Lost Story of the Ocean Monarch: Fire, Family, & Fidelity

The ship was almost instantly in flames Some jumped overboard immediately, and all was in indescribable confusion. The masts began to fall one after another, and it is supposed killed great numbers by their descent. Others, it is feared, were roasted alive, but the majority were drowned. (Hull Advertiser and Exchange Gazette, 25 August 1848)The Ocean Monarch was only a few hours out of Liverpool on 24 August 1848 when a cabin passenger shouted Fire! and all hell broke loose.

Bound for Boston with almost 400 people on board, the emigrant ship was soon ablaze with little chance of putting the flames out. People watched helplessly from their cottages along the Welsh coast as some ships ignored the travellers plight while others raced to their aid. On the 170th anniversary of the disaster Gill Hoff's reveals the full story of this forgotten wreck, including tales of French royalty, an American artist, and a courageous stewardess who gave her life to save her fellow travellers.

Discover what happened to the passengers and crew, including: James K. Fellows, a kindly American jeweller trying to get home to his family Jotham Bragdon, the first mate who fled the wreck then returned to shore a hero Mary Walter and her mysterious family, escaping danger in London only to find greater peril lay at sea Follow the murder trial of a crew of rescuers and find out the real fate of their victim and whether the mysterious Irish toddler Kate found her family again.