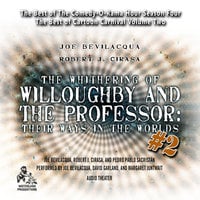 The Whithering of Willoughby and the Professor: Their Ways in the Worlds, Vol. 2

These are the further misadventures of the pertinacious professor and his perky partner who pucker around the planet and through time and space, in a vain attempt to “cure the world of all its ills.”

“You’re a God, Apollo Jacques! or Boys Don’t HaveFeats” – the seventeenth and final episode in the NPR/Sirius XM Satellite series

“The Squidge Attack” – a short story, part of Pedro’s Fables

“The Incompetent Genie” – a short story, part of Pedro’s Fables

“Willoughby and the Professor Meet the Godfather” – an early prototype improvisation

“Willoughby and the Professor Go to Hollywood” – an early prototype improvisation

“Dimension X Revisited, or Willoughby Goes and Gets It” – a new radio theater based on the short story appearing in the book It’s That Time Again: The New Stories of Old Time Radio