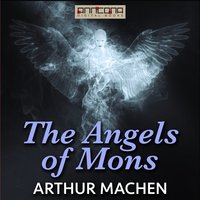 The Angels of Mons

The Angels of Mons (or The Bowmen and other Legends of the War) is a collection of stories written by Welsh author Arthur Machen.

In September 1914, two months after the outbreak of World War One, Machen published a short story called The Bowmen in the London Evening News. It describes how phantom archers from the Battle of Agincourt had come to the rescue of British soldiers fighting against the Germans in the Battle of Mons a month earlier.

The story was not labelled as fiction and the author soon became to receive enquiries from readers asking for verification of these ghostly archers, who had apparently been summoned by Saint George, the patron saint of England.

It appears Machen did not intend to create a hoax, but that the public, just starting to grasp the full horrors of World War One’s mechanized warfare and its heavy death toll, was ready to believe that a ghostly miracle had occurred in France.

Rumors were followed by more rumors and fiction started to become fact in the minds of some. Machen’s story took on a life of its own. Spiritualist magazine wrote about the ghostly bowmen while some people took the story of the angel archers as a sign that God was on Britain’s side.

In 1914, Machen published a book, The Angels of Mons, in order to put the record straight. In the preface he states that the story is fiction. The book became a bestseller, but the public belief in the story became stronger and more reports of angels on the battlefields started to appear.

The foreword of The Angels of Mons is an long examination of why some people believed the story was true. Machen tries to explain how the rumors began. Reading between the lines, the key theme is really religion, which was still a very strong aspect of British life in 1914 and the public wanted, expected even, miracles.

After the foreword, The Bowmen tale, which is fairly short, is recounted and then followed by more of Machen’s war-themed short stories. The author paints a very dark picture of the Germans and continues to play on the belief that spirits are appearing on battlefields. His final story sees the Greek heroes from Troy visit the trenches of Gallipoli.